skip to main | skip to sidebar

I hosted my first 1914 game the other day at my store. The game was to represent the action at Nery between British and German Cavalry. The British had one HMG section at the Sugar Factory, one gun section of 13pdrs in the hay field (L battery) and two dismounted cav troops in the town (11th Hussars). They had a reserve platoon but did not know what it was or where it was going to come in. It was a troop of mounted Guard cav in delayed reserve but more on that later. 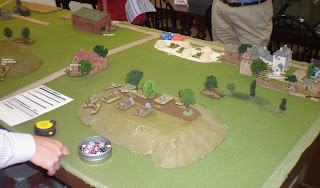 The Germans had a full battery of 7.7 guns, one HMG section and two mounted troops. The guns were deployed on the ridge and the players were given the option to have the cav mounted or dismounted, they chose mounted.
The first turn the Germans were the attacker and got to fire first but not move. The British started pinned down to represent the surprise and the lifting fog. 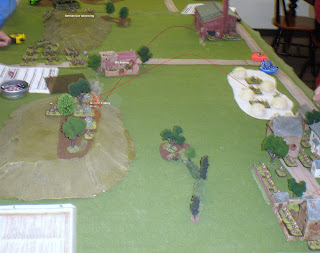 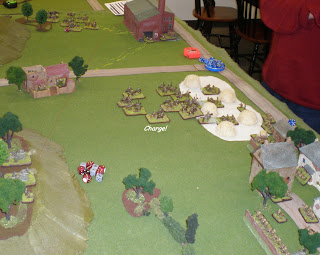 ﻿
After some exchange of fire and maneuvering, The German Artillery had been reduced to two guns while L battery stayed whole. The German cav charged across the field at the guns and took a  few before they were shot to pieces. The troop that was trying to take the Sugar factory was mowed down by the HMGs.
﻿ 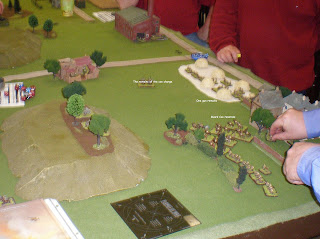 In the end the Germans went below half strength and not having a CO failed company morale. The British lost L battery but held the field. It was a good game and all had a grand time with many cheers and laughs. Thanks to the players for entertaining me and my WWI obsession.
Posted by Huzzah Hobbies at 9:20 AM 3 comments:

I finished my core stands for the Early German army. It is 1- 4Wb(Gen), 10 - 4Wb & 1 - 2Ps. As I noted in my previous post, I based three figures instead of four on the 4WB base size. I could not see mounting four. It would be to crowded. I enjoyed doing the guys and I really like the poses. The shields are okay, I wish I could free hand scrolls better but... 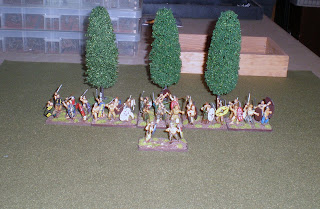 For their camp I mounted up an Ox cart. I think it will work fine. I left room for a stand to be placed on it. In the future if I find some camp followers I will add them. 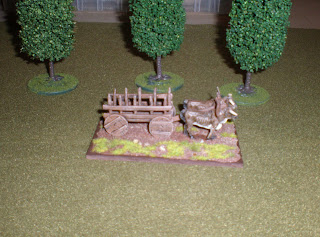 Well I was wrong in my last post. The barbarian army I am building are actually going to be Early German not British as I had noted in my last post. I have decided to go with three figs on the 4Wb (20mm) stand. Putting four of these guys on a stand would be really crowded and I don't think it would look as good. I will be able to build the A, B, D, F & G lists when I am done but for the moment I am going to focus on the G list.  This army is to be a matched pair for the Romans so I will only focus on those lists.


This is what they looked like when I got them. Some still do. 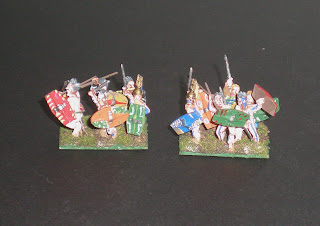 This is after a Simple Green soak and a wire brush. 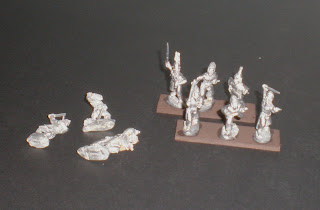 ﻿This is them in all their glory! Not the best pic, still trying to figure this camera out. I will post pictures of my finished army hopefully soon. 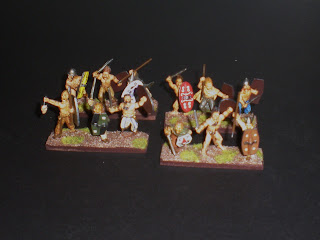 I have ordered some shield decals and am waiting to see how they will work.

Losing focus but gaining an army

I started this year with a list of projects and was hoping to stick to it. Well, that didn't last long. I wan digging through the bins of figures I have and came across some 25mm Romans. When I opened the shop I had taken a few stands and rebased and touched them up to make a demo DBA army. They are RAFM historical figures which we can call old school style. So I did five stand and five stands of some Old Glory Celts (more on them later). They never really got used so they were put away and kinda forgotten. So I am looking at the bin of figs and decide that I don't need all of them, seventy some painted green, yellow and blue. I pull the blue ones, rebase and touch them up as Aux, four stands. The others are in the case at the store for sale. This gives me four Blade, a Blade general and the four Auxilia. Not much more and I have an army. I find two cav that will work as Light Horse, so I ordered the artillery piece (using some extra figs as crew) and Cav from RAFM to finish it up. They are not great but a decent gaming quality and I think it will make a great army for a better visual game. The camp is very simple and generic, works for me. 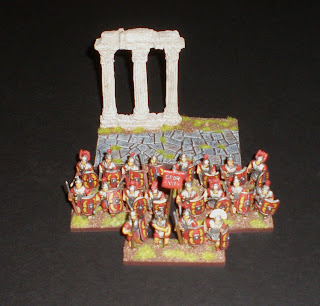 The RAFM figs are not that bad. They have separate heads and weapons so you can personalize them. They are the older chunky style but still not bad. For the Aux I removed any plum form the helm to give them a different from the Blade along with the different base and staggered line basing. 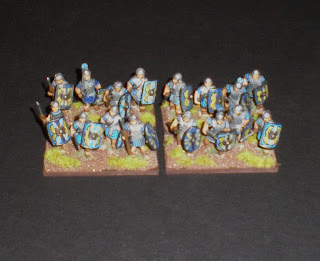 Once the Cav and Art come in I will paint them up and will be done. I will post a pic of the complete army then.

As for the Celts, I have decided to do them up as a British Amry so I have a matched pair. Since I have a ton of Old Glory figs I will not need to buy anything for them but it will be a total Warband army. I do have enough cavalry to give them two light horse to add a little something different. These will take a little longer as I have to strip the figs (ghastly paint job) and repaint them.

I am still working on my FoW - EW, MW and LW but slowly and my WWI figures have been calling my name lately ...
Posted by Huzzah Hobbies at 9:24 AM No comments:

I have completed a few more parts to the many projects I have in the works.
First up is a Flames of War early war Panzer IIC platoon. I really dragged my feet on doing these because I was not enthused about them. Thier stats are not that great - Rof 3, AT 5, FP 5, but they are a required combat platoon for the Czech tank company that I have. I have been having trouble with the big tanks of EW, Char B, T34, etc. and could not see how these little guys would help. My air support was not making it through the AA fire. Well they can't help on the monsters but they are a good light vehicle/infantry killer so they can be good for holding an objective. 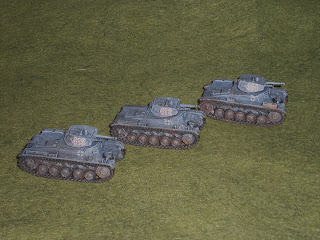 These are 28mm tents that I have been molding for my Song of Guns and Shakos/'61-'65 games. I found a really old resin tent and just made a mold with 3D Gel and Plaster of Paris from the craft store. The molds only lasted three pours each so I will need to find a better molding compound for my next project. Once dry I will paint them to seal and protect them but they will be fragile.

On the table now is another unit of archers for WHFB, and some French ATGs. I am considering a Hungarian Assault gun company for a FOW 1750 challenge pyramid we are going to start at the shop. Just what I need, another project in the mix. We will see...
Posted by Huzzah Hobbies at 8:24 AM No comments:

Here are a few pics of my latest Warhammer Fantasy Bretonnians. I plan on using the archers and billmen for HYW/WOR 28mm DBA in the future. 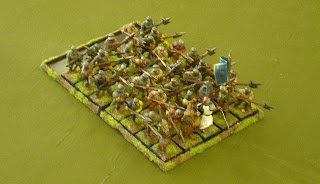 Seven ranks of five billmen with full command and a knight. I am hoping this dept will allow them to stay on the table longer. 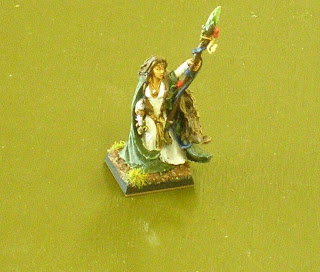 A GW Damsel, not a fan of Magic but I am finding it is an important part of the game. I am planning on using her more for defence from Magic than actually attacking with it, more because I am up to speed on the Magic phase. I left her eyes all white as if she was going into a trance. 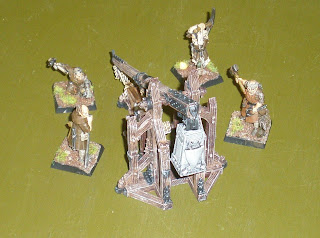 GW Trebuchet, I am not a fan of the crew though they did paint up nicely. The peasants are made to be such dregs of the earth and not my cup of tea. 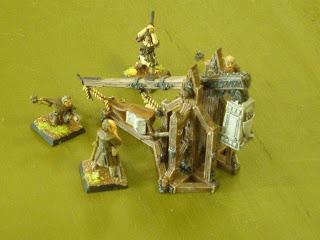 Song of Drums and Shakos is a skirmish level Napoleonics rule set that I just recently discovered. I have played it twice now using my ACW figs and really am enjoying it. I just got a copy of the 61/65 ACW company level rules that have the details on playing ACW with SDS (only a few rule changes).
I plan on writing a number of scenarios for the Mosby raids and doing some Peninsular War.

I have started on some terrain for this and will have pictures in my next post along with some more Bretonnian archers.
Posted by Huzzah Hobbies at 8:39 PM No comments:

For 2011 I have made a few personal hobby goals and I want to post them up to maybe help me stay on track and get a few projects completed. These are for me compared to my business (Huzzah Hobbies) goals.

First off is to blog more often. I would like to post at a minimum once a month but hopefully more often.

Next is a list of projects. Each is rated by priority (1-5, 1 being high) and percentage complete.

I try to get a few minutes of painting in every other day or so. This does not seem like much but after a while it starts to add up.

Currently on the table is a Brettonian Trebuchet about 75% complete. It is needed for the next pts game so I will focus on it till finished. Then I have some men at arms and archers for the next pts step.